The Response DVD and Lesson Plans 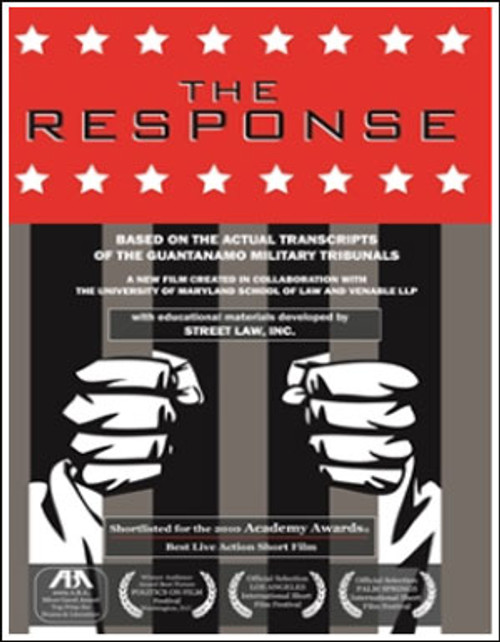 The Response DVD and Lesson Plans

The Response educational package includes a DVD of the 30-minute film and access to educational materials developed by Street Law, Inc.

Shortlisted for a 2010 Academy Award® in the category of Best Live Action Short Film and winner of the 2009 ABA Silver Gavel Award as best of the year in Drama & Literature, the film has been screened by enthusiastic audiences, including the Pentagon, Congress, West Point, the Department of Justice, foreign embassies, universities, and law schools.

The Response gives students a unique opportunity to see the inner workings of the Combatant Status Review Tribunals held at the U.S. Naval Base at Guantánamo Bay, Cuba from 2004 to 2007. The open-ended film asks viewers to determine how to balance the rights of detainees with national security interests.

The film works as a dynamic constitutional law primer to explore the courts, civics, civil liberties, habeas corpus, and much more.  The flexible educational materials help move students from a general understanding of the Combatant Status Review Tribunals to a specific discussion of the issues, ideas, and societal values at stake.

The film and materials can be used in a variety of settings:

The Response is a 30-minute courtroom drama based on a composite designed from actual transcripts of the Guantánamo Bay military tribunals. In the film three military officers must decide the fate of a foreign detainee.  Is he an enemy combatant, guilty of providing support to Al-Qaeda and responsible for the deaths of several American soldiers? Or is he an innocent victim of circumstances?

The Response was researched and fully vetted in conjunction with the University of Maryland School of Law, where the film was shot in just three days.